Via The New Arab – Freelance journalist Matt Broomfield describes the situation of LGBTIQ refugees on Lesvos Island. Hundreds of queer refugees who came to Europe to live a free life now face the same discrimination as they did in their home countries: by police, the asylum service and other migrants forced to live behind barbed wire.

Via The New Arab – From the gay Iraqi who saw Isis militants throw his lover from the tallest building in Mosul to the couple who escaped persecution to rendezvous for the first time in a refugee camp, each of the LGBTQI+ refugees trapped on the Greek island of Lesvos could fill a book with their own personal stories.

But these disparate voices – whether lesbian, gay, bisexual, transgender or otherwise queer [LGBTIQ+] – are united in condemnation against their treatment in Lesvos’ Moria refugee detention centre.

From police violence to institutional homophobia, they suffer persecution which often replicates horrors they thought they had fled.

“I left Morocco because for 30 years I was insulted, persecuted and beaten by the community, the police and my family,” Taim, a bisexual man, named told The New Arab.  “But on Lesvos, I found the same things,” he added.

The Hellenic Police were contacted for comment but did not respond.

The situation is grave for all of Moria’s detainees. The 2000-capacity former military prison now hosts over 6000 people, 3000 of whom have no shelter, save flimsy summer tents. Six inmates died last winter, and hundreds of new arrivals are piling in every week.

All the major NGOs pulled out of Moria last year, saying they could not work in such inhumane conditions

But LGBTQI+ refugees are particularly at risk, living with absolutely no privacy among the very communities they were trying to flee.

“For gay people like us,” Ugandan lesbian Winifred said, “Moria is hell.”

When gay asylum-seeker Joab arrived at Moria, he was assigned quarters in a cramped container with 20 other people from his region of Africa.

Slight and camp, he says his sexuality was “obvious” to his new neighbours as soon as he opened his mouth:  “They said do not enter here, they said they would beat me.”

Joab fled, but asylum services had just closed, so he was handed a blanket and told to spend the night on the doorstep. He passed a terrified and sleepless few hours, fearing attack by a homophobic mob at any time. In the Greek winter, a night’s exposure like this could kill.

Eventually, Joab was transferred to a small referral-only camp for vulnerable individuals. Others are not so lucky, complaining the police wait to see a direct homophobic attack before they take their complaints seriously.

Winifred’s desperate request for transfer out of Moria was ignored, she says, though she faces harassment every day.

“I get the same abuse that I suffered in my country,” Winifred said.

“It hasn’t changed here. People call me a freak of nature, they say I am shameful.”

Some LGBTQI+ refugees fear rape every time they go to the toilet. Some have been hospitalised following homophobic attacks. Others suffer sexual harassment in the hours-long queue refugees must endure twice daily to collect their meagre food ration.

All must repress their sexuality for fear of violent reprisal, in a breach of their human rights which again replicates the very conditions they fled.

“In the camp nobody knew I was gay,” an Iraqi named Rashad tells The New Arab. “I couldn’t tell anybody.”

Far from offering adequate protection, the Greek police indulge in homophobic violence and harassment themselves. “It’s the same thing here and [in] Iraq, a lot of police guys in the street who want always to see your identity [card],” shrugs another gay Iraqi, Suad, sweeping back his bleached-blonde hair.

“Three policemen surrounded me in the street in [Lesvos’ principal town] Mytilene and touched my ass, only me, because I am effeminate,” says softly-spoken Rashad. “They asked if I had a condom with me.”

One queer couple was allegedly forced to kiss by a jeering ring of police. Taim ran to the guards for protection after a beating in Moria, only to be met with mocking laughter and a camera-phone lens.

These incidents are ugly enough, but ignorant and homophobic attitudes during the life-changing interview process can be even more damaging.

“They didn’t get the idea of being gay,” he adds. “They asked ‘active, negative, bisexual’… what does it mean?'”

Suad was the model of ‘camp confidence’ and was able to ride out these questions –  including an inquiry as to whether he was “doing it with a lot of people” – before convincing the interviewers of his sexuality.

But for queer individuals who have spent a lifetime repressing their sexuality and hiding it from institutions they fear could harm or imprison them, an interview model built on invasive personal questions is a serious barrier to securing asylum. Refugees are only believed to be LGBTIQ+ if they are “girly” – a criteria rejected by the EU Court of Justice as an outdated stereotype which excludes many people who have suffered all their life for their sexual orientation, condemning them to deportation.

A new programme of fast-track deportations meanwhile, targets refugees from countries accused of sending “economic migrants” to Lesvos –  Morocco, Tunisia, Algeria, Pakistan, Bangladesh, Cameroon – for immediate detention and rapid expulsion from Europe. But LGBTIQ+ people are criminalized and face violent persecution in all these countries, and this “racist and illegal” LINK policy will likely thrust queer refugees back into life-threatening danger.

Eighty percent of refugees who were recently assessed in Moria by Médecins Sans Frontières suffered from “severe” mental health issues.

One-fifth had been tortured, and half of all women had suffered sexual violence. In spite of this, there has been a “dramatic deterioration” in the provision of mental health care, with only “grossly deficient” support in place, MSF reported.

Since the EU-Turkey deal was signed in March 2016, reported instances of self-harm in Moria have increased by 600 percent, while suicide bids seem a weekly occurrence. And once again, queer individuals are at the heart of this epidemic.

“I knew Isis were going to kill my friend by throwing him from the top of the highest building in Mosul,” Suad said.

“I went there every day to watch the executions, just in case it was my friend [being executed].”

His flamboyant façade slipped, and he repeatedly broke off into tears.

“You can’t see who [is about to be executed], they cover their faces,” he continued.

“But I felt sure it was him that I could see. Afterwards, I saw his body on the ground and it was – it was him.”

The tears returned. His distress was unbearable. It was the most gruelling interview this reporter has ever conducted.

“I just want to sleep well, to have my mind proper and feel normal,” he managed.

“I have been in a trance for months. The doctor is not professional, he just gives me pills – I can’t talk, I’m afraid he will not understand.”

Sleeping pills and paracetamol are dished out by the bucketload, but there are no trained psychologists in the camp.

LGBTQI+ refugees also cannot necessarily rely on the volunteers there to support them. All the major NGOspulled out of Moria last year, saying they could not work in such inhumane conditions, so the day-to-day running of the camp is left to hardline evangelical Christian charity Eurorelief.

Since the EU-Turkey deal was signed in March 2016, reported instances of self-harm in Moria have increased by 600%

Queer refugees say Eurorelief volunteers can dismiss them as “sinners”. And as Suad pointed out, even well-meaning “volunteers and students” are “not really helpful” when compared to trained psychologists.

Sexual health is also a pressing concern, since Eurorelief do not distribute condoms in Moria, and there is no dedicated sexual health support for refugees. Dangerous sex work is commonplace – I met refugees who had sex with local men in exchange for marijuana, snacks and a warm bed. 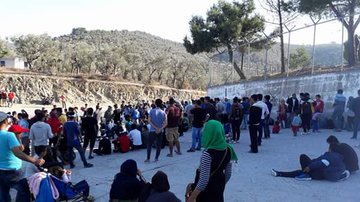 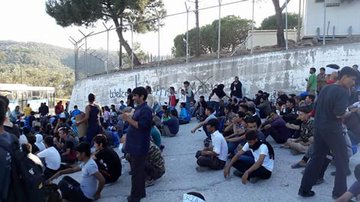 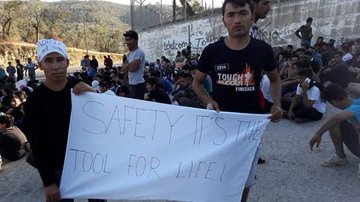 Unwanted by everyone else, and ignored by the authorities, it is unsurprising that the queer refugees trapped on Lesvos stick together. Around 20 individuals are now organised into a collective called Lesvos LGBTIQ+ Refugees Solidarity.

This group offers queer refugees a modicum of the freedom they came to Europe to find. It’s a non-hierarchical space where they can access individual support and formulate collective demands.

Their loudest demand is for an immediate transfer to the mainland, to await their full interviews there.

Greek Asylum Service will not remove the ‘geographical restrictions’ that keep LGBTQI+ asylum seekers trapped on Lesvos unless they recognise individuals as ‘vulnerable’- a survivor of torture, rape or other serious forms of psychological, physical or sexual violence or sexual exploitation.

In reality, almost every member of the collective meets this definition. However, the harsh and outdated interview system means many LGBTIQ+ people are left to languish in Moria, suffering further persecution.

Homophobic, transphobic violence survived on Lesvos should be justification in itself for transfer. But this must be reported to the same police department which harasses and abuses LGBTIQ+ people, leaving truly vulnerable individuals with no way to escape the island.

Though life is difficult off the islands as well – one activist told The New Arab that 95 percent of the transgender refugees he met in Athens were involved in dangerous sex work. Although there are more support services in place, and far more space to breathe than in the close, violent confines of Moria.

“[Other refugees think] gay people should leave the camp because they can get help anyway,” says Joab, the Ugandan gay man.

“People don’t want them there.”

Yet the collective wear their identities with defiant, humbling pride.

At the start of our interview, I asked Suad how he would like to be identified.

Matt Broomfield is a freelance journalist who has written for the Independent, VICE and Motherboard

This article was originally published at The New Arab