The Turkish state’s attempt to remove Syrian refugees to so-called safe-zone in Northern Syria have been proven to be unrighteous by several reports released in the past weeks, as the deadline given to unregistered Syrians to leave Istanbul, 30 October, approached.

Human Rights Watch’s report details the hostile and unlawful treatment involved in the arbitrary deports and detentions of Syrians in Istanbul and Antakya between January and September 2019. The report underlines that a significant number of Syrians are being deported against their will to one of the most dangerous areas in Syria, Idlib, where at least 1,089 civilians have been killed since April. HRW invites Turkey’s Interior Ministry to ensure that Turkish authorities do not use violence against Syrians or other detained foreign nationals and to hold any officials using violence to account. – 24.10.2019

Amnesty International’s report also accuses Turkish authorities of forcibly deporting hundreds of Syrian refugees back to war-torn areas in the north of Syria, by using threats, force and deception. The report includes testimonies of refugees who were beaten into signing ‘voluntary return’ documents, and others who signed in order to receive blankets from detention centres. “Returns until now have been anything but safe and voluntary – and now millions more refugees from Syria are at risk” says Anne Shea from AI. – 25.10.2019

END_OF_DOCUMENT_TOKEN_TO_BE_REPLACED

Representatives of both the AKP and CHP parties, newly elected in the 31 March municipality elections, continue to use anti-Syrian sentiment as a key platform to gain popular support. The recently appointed CHP Mayor of Bolu, Tanju Özcan, has followed through on delivering his two pre-election promises of 1) Cutting off municipal financial aid to Syrians and other asylum seekers and 2) Not granting them municipal permits to open businesses in Bolu. In doing so he is privileging so-called economic tensions created by Syrians as the main “issue” to be resolved, despite the economic revenue generated by unregistered businesses opened by them.

END_OF_DOCUMENT_TOKEN_TO_BE_REPLACED

Turkey’s state-run news agency “Anadolu Agency” has been providing contradicting numbers on the irregular migrants held by Turkish authority across the country. By the beginning of this year, the agency announced the number of the migrants held in the seas around Turkey to be 26,678 for 2018, indicating a rise of 21.6 percent compared to 2017. Regarding 2019, the numbers released so far sum up to more than 2,500.

END_OF_DOCUMENT_TOKEN_TO_BE_REPLACED

Via Independent Balkan News Agency – Part of the fence built by Bulgaria at the border with Turkey to stem illegal migration has fallen for a second time, brought down by heavy rain in the Malko Turnovo area, reports on December 6 said.

This article was published at Independent Balkan News Agency

Reports reveal Turkey’s further plans to engineer the movement of more Syrian populations to the outskirts of Turkey. One of the sources mentions a decision to transfer 34,180 Syrian refugees from five camps to facilities closer to the border with Syria, and another quotes Erdoğan’s pledge to create more safe zones in Syria in order to allow refugees to return. END_OF_DOCUMENT_TOKEN_TO_BE_REPLACED

Via Daily Sabah (20th July) – Forty-four illegal immigrants who were apprehended by Turkish troops near the border, claimed they were beaten by Bulgarian police and sent back to Turkey, the İhlas News Agency reported. Migrants from Afghanistan, Pakistan, Iraq and Iran were discovered by gendarme troops guarding the border between Turkey and Bulgaria in the Kofçaz district of the Turkish province of Kırklareli on Friday. They told Turkish officials that they crossed into Bulgaria three days ago but were captured by Bulgarian police. They claimed Bulgarian police officers beat them and stole their money and valuable possessions before sending them back to the Turkish side of the border. END_OF_DOCUMENT_TOKEN_TO_BE_REPLACED

Despite a significant drop in Syrian refugees entering Europe from Turkey, member states did not want to finance the mega-deal from their national coffers, and instead asked to raid pre-accession funds or divert cash from the EU budget. END_OF_DOCUMENT_TOKEN_TO_BE_REPLACED

Bulgarian Interior Minister Valentin Radev and his Turkish counterpart Süleyman Soylu met in Edirne on May 29 for a workshop on border security and co-operation, the first such workshop on the topic of its kind between the two countries.

The main focus of the talks was the efforts made by the two countries to ensure the security of the most sensitive external European border – the Kapitan Andreevo checkpoint, Bulgarian National Television reported.

END_OF_DOCUMENT_TOKEN_TO_BE_REPLACED

Via euobserver (02.05.2018) – Some six years after Greece erected a 10km barb wired border fence along a stretch of the Evros river it shares with Turkey, the European Commission has announced plans to create a standing corps of 10,000 border guards.

On Wednesday (2 May), the EU executive proposed the idea as part of its aim to overhaul the EU budget for the years 2021-27. 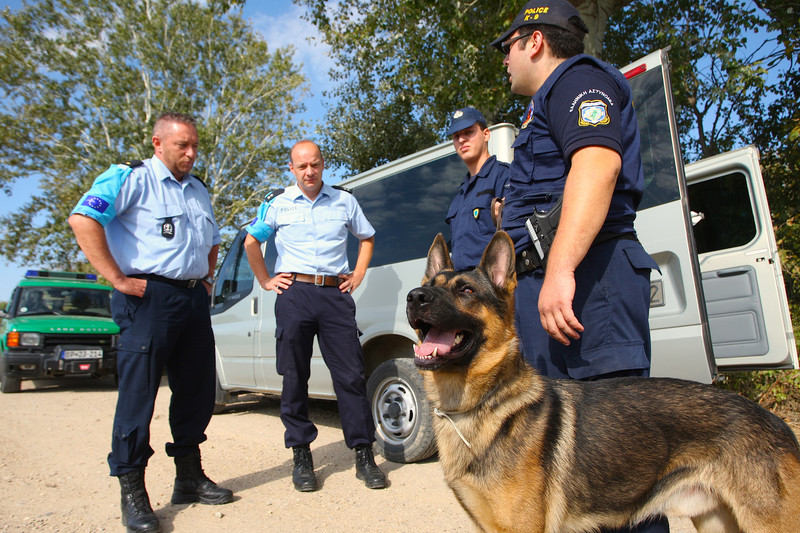 Frontex had 300 border guards in 2015. Under EU Commission plans, that could increase to 10,000 in less than ten years (Photo: europarl.europa.eu)