Meanwhile, in the four-day trial against the #Moria35 in April, 32 of the 35 defendants were collectively convicted of injuring police officers. The process was politically motivated from the very beginning with almost no proof against the defendants. They were collectively convicted to a 26 months suspended prison sentence, though this penalty is temporarily suspended, since their lawyers lodged an appeal against the decision. V. H., who contributes to HarekAct, drawing on her insights on the situation of refugees on Lesvos and focusing on their detention and deportations, wrote a report about the trial, that we published on HarekAct (in German). END_OF_DOCUMENT_TOKEN_TO_BE_REPLACED

Via The New York Times – By Mujib Mashal; KABUL, Afghanistan — Their desperate journey out of Afghanistan, en route to safer lives in Europe, had taken months through high mountains and treacherous deserts.

They survived bullets, beatings and insults from border guards. Bandits stripped them of nearly everything except their shoes and clothes — which over the months of the journey they would wash in whatever puddle or pool was available, laying the clothes out in the sun to dry and then wear again.

But their migration halted suddenly in Turkey, and now they were being deported to a home country racked by war. I flew with them on the return flight to Kabul from Istanbul that finally ended their hopes. It took just five hours last month. END_OF_DOCUMENT_TOKEN_TO_BE_REPLACED 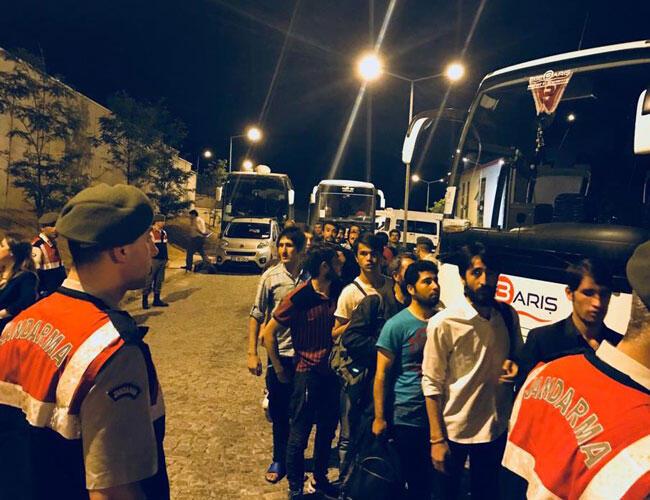 Via Daily News (06.05.2018) – Hundreds of undocumented Afghan and Syrian migrants have been rounded up and deported during anti-human trafficking operations in Turkey’s Aegean provinces, state-run Anadolu Agency reported on May 5. END_OF_DOCUMENT_TOKEN_TO_BE_REPLACED

Via Hurriyet Daily News (from 19th April) – On a mountainous road leading west from the Iranian border, 22-year-old Sunnatilla Rasulbek trudges through heavy rain, one of tens of thousands of Afghans hoping to find work and security in Turkey before a wall goes up to keep them out.

END_OF_DOCUMENT_TOKEN_TO_BE_REPLACED

Via Amnesty International – At least 2,000 Afghans who fled to Turkey to escape conflict and the worst excesses of the Taliban are in detention and at imminent risk of being forced back to danger, Amnesty International said today. The Turkish authorities appear to be ramping up a deportation spree that has seen 7,100 Afghans rounded up and returned to Afghanistan since early April.

The Turkish authorities told Amnesty International that all these returns are voluntary, and that the UN Refugee Agency UNHCR has periodic access to places of detention. However, in telephone interviews with detainees in the Düziçi container camp in southern Turkey, where at least 2,000 Afghans are believed to be held, Amnesty International heard how detainees have been pressured to sign documents written in Turkish, which they are unable to understand. These could be “voluntary repatriation forms,” which the Turkish authorities have previously used in coercive circumstances with Syrian and other refugees.

END_OF_DOCUMENT_TOKEN_TO_BE_REPLACED

For Afghan refugees, Turkey is seen either as a bridge to reach Europe or as a country of immigration in which they want to settle and join their friends and relatives. The continuation of war, conflict and poverty in Afghanistan pushes millions of them to seek a life in other countries. The beginning of Afghan immigration towards Turkey goes back to the first half of the 1980s. Turkish authorities initiated the settlement of a few thousand Afghan refugees with ‘Turkish origin and culture’, including Turkmen, Kyrgyz, Uzbek and Hazara origins. Turkey had already signed the Geneva Convention in 1951, but it still preserves the geographical limitation and thus does not give the refugee status to people coming from outside Europe. However, it also implements the 1934 Law on Settlement (İskan Kanunu) and uses the flexibility of this legal framework. According to this law, persons of Turkish ethnic descent and culture can immigrate, settle in Turkey and eventually receive Turkish citizenship. Such initiatives have contributed to the long-term settlement of Afghans in Turkey, and thus Turkey is perceived as a possible immigration country by Afghans. END_OF_DOCUMENT_TOKEN_TO_BE_REPLACED