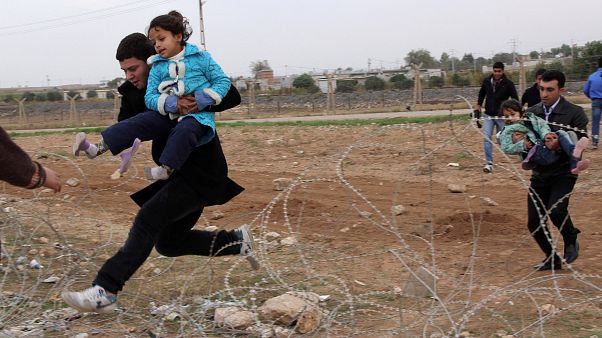 Via euronews – By Sara Kayyali: At a border crossing between Syria and Turkey, a smuggler preparing a group of seven Syrian asylum seekers to enter Turkey told a 13-year-old boy to cross. He pointed toward the other side of a wide street, and said, ”See there? Run over there, that is Turkey.” The boy ran. Moments later shots rang out and the boy fell dead on the street. The smuggler turned to the rest of the group and told them, ”You can cross now, they will not shoot again.”

This was one of the many dangerous smuggling tactics Syrian refugees told me they observed while risking their lives as they desperately tried to reach Turkey.

Families I recently interviewed in southern Turkey, many fleeing the fighting against the Islamic State (ISIL), used smugglers to escape. For three years, the only way Syrians have been able to cross Turkey’s closed border is if they have been badly injured and need life-saving medical aid or if they find a smuggler to help them slip past Turkey’s border guards.

Turkey has earned accolades for hosting more refugees than any other country in the world—including 3.5 million Syrians—but it has almost completed a 900-kilometer border wall and has pursued a violent policy of shooting at Syrians trying to cross the border. Since at least mid 2015, it has deported vast numbers of Syrian asylum seekers intercepted at the border, which we have documented repeatedly.

According to Mediapart, a French investigative journal, the European Union has apparently supported Turkey’s efforts, giving Turkey 83 million Euros for military vehicles and equipment to “hunt down” refugees, “including at the Turkey-Syria border.” If confirmed, this support is a new dark chapter in EU migration cooperation with Turkey, and might explain the EU’s silence over Turkish border abuses.

Over 6 million Syrians have fled the country since the conflict began in 2011 and at least 6 million more have fled their homes, but remain in Syria. By mid March, almost 400,000 people had fled Deir al-Zour, which was the last central ISIL stronghold in Syria, according to the UN. Many were smuggled to Turkey.

For many of them, staying in Syria was not an option, and Turkey’s effective border closure only meant that it was that much harder to get to safety.

In addition to requesting exorbitant amounts of money from vulnerable people, smugglers often lead asylum seekers on life-threatening trips, on inadequate rafts, through minefields or along steep ravines, sometimes in freezing weather, or telling them to jump from meters-high walls. Asylum seekers told me they paid smugglers between US$300 and US$8,000 to get into Turkey, often exhausting their resources, or going into debt. The asylum seekers included pregnant women, families traveling with young children who had to be drugged to sleep during the journey, or older and disabled relatives who had to be carried or literally crawl to safety. Many fled with nothing more than they could carry.

Syrian asylum seekers understand that after seven years of conflict, neighboring countries are no longer willing to help. As we’ve seen in Jordan, Turkey and Lebanon, they will build walls and create administrative hurdles to keep asylum seekers out.

But we have seen first-hand that the instinct to survive is unstoppable, and asylum seekers will risk their money, land, and even their lives for the promise of safety.

Closing borders won’t deter people from making the journey but instead will heighten the risks, make smugglers rich, and make border inspection and screening less likely.

The world needs Syria’s neighbors to allow Syrian asylum seekers to enter at least temporarily to assess their claims and conduct proper security screenings. To make that feasible, the European Union, the US, and other countries need provide far more help.

That means expanding aid for refugees and host communities in Syria’s neighboring countries, and making sure border security funds are not used to stop asylum seekers from fleeing but rather to establish proper reception centers where traumatized people can be treated with dignity while ensuring the legitimate security needs of receiving governments. And it means directly sharing responsibility for hosting refugees by stepping up the resettlement of Syrians to Europe and the US.

Sara Kayyali is the Syria researcher at Human Rights Watch.